MSS Receives a Gift of Gratitude From Soldiers

Main Street School students – who sent care packages to Major Berto Lainez and his troops, who are stationed in Iraq – received a special gift of gratitude from the soldiers. They enclosed an American flag, a certificate of its authenticity and a handwritten note.

In his note, Major Lainez expressed his gratitude to everyone involved in the Boodle Box project and for the opportunity to partner with the school. He said that he and his troops gifted the American flag, which was flown during their operations in honor of Main Street School, to all MSS students, teachers and staff.

Earlier in the school year, fourth and fifth graders assembled the care packages to thank the soldiers for their service and sacrifices for our country. Following the shipment of the Boodle Boxes, the students connected with the soldiers via Google Meet and engaged in thoughtful discussions around the school’s enduring understanding about global citizenship.

After receiving the gift of gratitude, Principal Joyce Chapnick shared it with the entire school community as students saluted the flag during the Pledge of Allegiance. The experience was recorded and shared with Major Lainez, who sent his sincere appreciation for the collaboration in this special project. 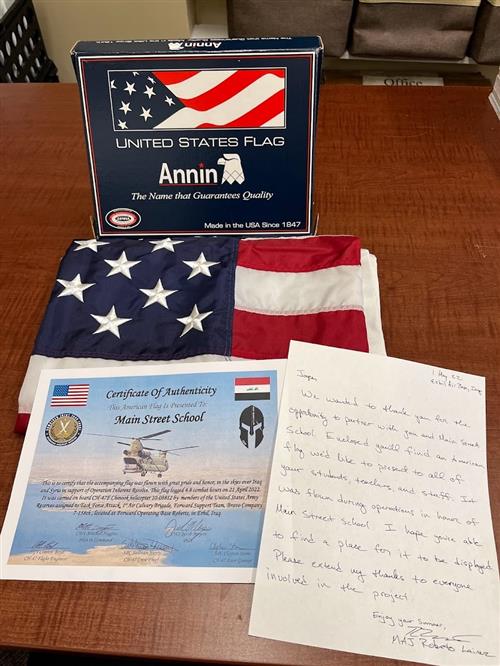